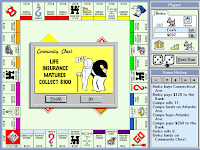 This is going to be short because, well, what is there to say, it's Monopoly! I played against a single computer opponent, which is the absolute worst way to play Monopoly. If there's one thing Monopoly's not, it's a fun two-player game. It's just too random and there's not enough strategy and player agency. It only really works as a social game, preferably with family, and preferably ending in a huge argument with the board being flipped in the air and pieces thrown everywhere...with lots of stealing from the bank (or at least accusations of stealing from the bank, which just serves to fuel the arguments) and name calling. Unfortunately, the computer pales into comparison with the full family experience (I'm sure it can't just be my family), and it runs away, tediously winning the game in the way only computers can, without any of the excitement of a real game. It may be an enduring classic, but let's face it, mechanically it's not a great game, not any more. One game is definitely enough for me. Onwards!

Next up on the randometer is...Wembley Rugby League! Timely with the Six Nations going on, but League, which is the Devil's version of Rugby. Ah well, it's worth a go. Computer rugby games are traditionally appalling (other than Jonah Lomu Rugby on the PlayStation), so it'll be interesting to see how this one plays out.
Posted by Binkbenc at 22:00