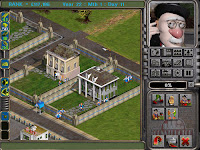 I think I'm done with Constructor. There is no campaign mode as such, so the only real option is to try and complete one of the 'mission' modes, which are just things like 'earn $1,000,000'. I think the real fun would have been in multiplayer - singleplayer just doesn't have the depth of, say, Civ or one of the other city builders. So what is Constructor? it's a city building sim where you have a city map made up of plots of land that you can purchase from the council to build upon. You can then build housing (of various levels) or  different commerce or manufacturing buildings, such as lumber yards or cement yards that both increase your resources and the amount of different building options you have. You can also construct specialised buildings such as communes that allow you to send hippies off to disrupt your opponent's building plans, or pizza parlours that allow you to buy the favours of the local mafioso. Yes, it's that kind of game - serious on one hand and comedic on the other. That kind of interaction is what would make it pretty cool multiplayer - including actually fairly decent (in a low-poly '90s way) videos for each building/person. As I say, though, go under the comedy and it rapidly reveals itself to be a fairly complex business sim with a lot of numbers to juggle in order to progress into the upper echelons of the game. I'm rubbish at these types of games, and don't really enjoy them that much, but I surprised myself here and actually felt like I was doing okay in the time I played with it.I know that I only scratched the surface, but I'm ready to move on.

Next up on the randometer is...Targhan! Never heard of it. Looks like a side-scrolling barbarian beat-em-up from 1989. Golden Axe crossed with Conan. Might be fun.
Posted by Binkbenc at 22:01