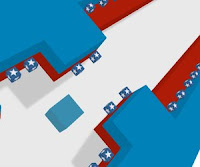 So, it turns out that Expander is actually a phone game that's been ported to PC. It's a game that was clearly made for touch screens, and the controls on PC are pretty horrific. That's not quite true. It's not that the controls are bad per se, they're just nowhere near as intuitive as moving your fingers on the screen. Luckily, I got it for Android in the deal at the same time. Let me step back and describe the game a bit. You essentially control the size of a bar - think a Pong paddle. Move your finger to the middle and the bar gets shorter, pull your finger to the outside and it gets longer. There is a direct and tactile relationship between the position of your finger and the size of the bar - something that is impossible to replicate with a PC keyboard. The only other input that you have is effectively a jump button, performed by tapping on the other side of the screen (with your other hand). The game is played on two planes - by default, you're on the lower plane, and when you press the button you move up to the higher plane until you release the button to drop back down again. It reminded me a bit of Zaxxon to begin with - the simple, clean block graphics showing the planes and an isometric viewpoint. There are little cubes at the sides of the course - red on the lower level, blue on the upper - that you need to collect by hitting them with the bar. The screen scrolls past at a constant speed, and the sides of the course move in and out meaning that you're constantly readjusting the width of your bar and moving up and down to avoid obstacles or collect cubes. At certain points, the view changes, so you might be directly behind the bar or higher above it. The screen scrolls past at quite a lick, so you need amazing twitch gaming skills to collect the cubes and avoid the walls. Skills that I just don't have. I find this game pretty impossible. I've only managed a number of seconds before dying and having to start the level again. My poor brain just doesn't work that quickly. So, I'm going to move on from Expander for now. It's still on my phone, So I might go back to it for a quick blast another day. Onwards!

Next up on the randometer is...Unnatural Selection! Ooh, I remember this one from back in the day (no, it's got nothing to do with the recent Natural Selection games). You have to breed your own army of creatures to fight the evil ones. Might be interesting.

In other news, we're into Steam Summer Sale territory...did I succumb to the torrent of 'bargains'? Of course I did, and I was griping about how rubbish the discounts were as I clicked the buy button.
Posted by Binkbenc at 13:49