All peasant and correct

It turns out that Peasant's Quest was made by the people behind Homestar Runner (I never really watched any of it back in the day, so I didn't recognise Trogdor, etc.). So, it was pretty funny and pleasantly short. It's a spot-on parody of some of the tropes in the old King's Quest games. You travel across screens speaking to strange characters, finding items and solving quests. The graphics and text parser (yes, you have to type in commands, just like the original KQ) are present and correct, the puzzles are obtuse and there are terrible minigames that make the whole thing much harder than it needs to be. It's all good fun, though, and some of the text is genuinely amusing. It did at times reach the point where it was a step too far - e.g., ridiculously difficult arcade segments were an annoying feature of early Sierra games, and it's fine to poke fun at that, but that could have been done by the character acknowledging the ridiculousness of it and finding another way through. Just putting an annoyingly difficult arcade segment in your game that I'm forced to get through to proceed does nothing but make me annoyed. Anyway, other than that it was well worth a play through, and because it's Flash it's still available and easy to play on the Net (or at least it will be for the next couple of years before they finally kill off Flash...sniff!).

Next up on the randometer is...Mechanic Escape! Never heard of it, but it's on Steam, so I must have picked it up in a bundle somewhere. Looks like an indie platform game, so could be quite fun. 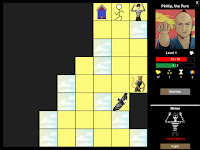 In other news, I forgot that a few weeks ago, before I went on holiday, I finished a game called Dream Quest on my phone/Steam. It's a bit like Desktop Dungeons mixed with a card game. The graphics are terrible - full on programmer art - but that fades into the background once the game gets its hooks into you. You choose a character from a variety of different classes (each with a special ability) and then move around a random dungeon fighting monsters in order to gain money and experience to gain more cards for your deck. It's not a massively strategic card game, but it's enough. The skill is in building your deck to give you the best chance of drawing your best cards. You can play as many standard attack cards as you have in your hand each turn, and then a limited number of spell and action cards depending on your spell/action points. Different character classes have different styles of play, so mages obviously have loads of spell points and cards for building up your spell point pool in order to cast powerful spells, while thieves depend on churning through action points, with fast decks full of cards that have small effects but then generate more action points and draw more cards so they can chain lots of small attacks together. Fighters, of course, have lots of attack cards, and also have an affinity with equipment cards that provide permanent abilities. There are loads of classes, and you unlock more as you play, so there are loads of strategies to try. Each game only consists of 4 or so levels, so it's easy to complete a quick game in a lunch break. It's addictive enough that I can see myself returning to it for a quick blast every now and then in future. Good stuff.
Posted by Binkbenc at 22:00