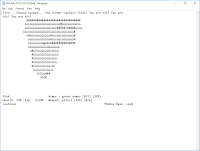 I'm going to call time on Doom: the Roguelike. I got down to level 8, which isn't very far, but it's far enough for me. There isn't a huge amount for me to say here. It's a text-based Roguelike with a Doom skin over the top. What's amazing is just how well it works. You move around the map just like any other Roguelike, uncovering new areas and pick-ups, and encountering monsters along the way. You have the same weapons as in normal Doom, and use them on the same creatures, firing and reloading as normal. Obviously, there are a lot of differences between the two games, but one of the big ones for me was the combat - here it's turn-based like any other Roguelike, but what that means is that there's no movement. You can't sidestep or dodge enemy projectiles, you just have to trade blows with enemy, meaning that you almost always get hurt in every fight. This is partially balanced by there being plenty of health potions around for you to pick up. I enjoyed it, but like many Roguelikes, you need to dedicate a portion of your life to it in order to complete it, and I just don't have time for that kind of dedication. Onwards!

Next up in the series is Doom 3. Slightly better graphics, similar gameplay. Oh, and flashlights.
Posted by Binkbenc at 13:47