Well, this might be the quickest run through of four games since...my last post. First up, Hard Drivin'

seems to be missing from my files, and I just have a copy of Race Drivin' in its place. Oh well, no great shakes. As for Race Drivin' itself, I can't quite work out whether it was the next game in the series or Hard Drivin' 2, but I'll go with Race Drivin' as that seems to be the slightly ropier version, but to be honest, they both appear to be incredibly similar games. Both games begin with you selecting manual or auto transmission on the car you want to drive. (I remember it used to be a really big thing whether you chose manual or auto in racing games back in the day - changing gears was a real badge of pride back in those days! I can't think of many modern racers that bother with gears at all - definitely not arcade ones. It's just an extra faff when all you really want to do is accelerate or brake.) Once you've chosen your car, you choose your track (HD2 has more cars and tracks available). There are opposing racers, but I found the biggest challenge getting to checkpoints and staying on the track. You can only spend 10 seconds off road before you get hoiked back onto the track, which is a bit of a shame, as it might have been fun to try and find shortcuts amidst all of that featureless wasteland. Trackside objects are in 3D, which is pretty impressive, and you also have bridges and jumps in the game and looping tracks that mean you might drive under a bridge one minute, then loop around and drive over it the next. Doesn't sound like much now, but hey, it all felt new back then. There are also cars driving toward you on the other side of the road that you have to avoid (or not). It's the kind of thing that might have been fun in limited doses, but it's completely ruined by the baffling decision to have it all controlled by the mouse (I'm sure you could change to keyboard somehow, but I couldn't work out how). Moving the mouse from side to side steers you, the left button speeds you up and I think the right button slows you down, but that never seemed to do much. It's horrendous. I guess the reasoning was because it gives you some kind of analogue control as opposed to the hard digital of a keyboard, and you do start to get used to it after a while, but it never stops feeling horrible. No thanks. Next up on the series list is the Dragonlance action games. I remember these being pretty horrible back in the day, so it'll be interesting to see how they hold up! 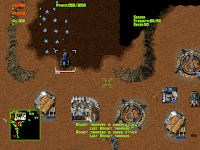 I'm also going to very quickly gloss over The L.E.D. Wars. As I guessed at, it's an old Windows game and doesn't run nicely at all. It does run, which I'll give it some credit for, but the mouse scrolling is completely messed up. It's an RTS, so there's a lot of clicking on units and moving them around the map, so scrolling is fundamental. Unfortunately, the screen scrolling seems to be completely random, sometimes it'll zoom past at 100 miles per hour, other times it won't budge at all (the usual reaction). It'll behave differently depending on which direction you're trying to move the mouse in, but even the way it behaves there will be completely random. You might be able to move up a bit, but then can't move down, then you try to move up a bit more but can't, but it does suddenly let you move down but skips to the bottom of the map in 3 nanoseconds. It's just impossible to play. What I did see looked like it might have been fairly standard fare. You have a basic command vehicle that can build other buildings, and different buildings create different assets, soldiers, resources, etc. So far, so similar. The only thing that stood out were the rubbish mission briefings, but then only because I've got a sneaking suspicion your boss is played by Swen Wicke, head of Larian Studios. Anyway, it wasn't going to work, so I'm not going to hang around.

Next up on the randometer is...Star Command Deluxe! Hmmm, looks like yet another '90s Windows RTS. And...it plays just like one, i.e. not at all. Early Windows games really do struggle under Win 10. Could be a growing issue. Oh well, looks like it's off the list for now.

Next up on the randometer is...Pipes! Looks like an early edutainment game. Shouldn't take long.
Posted by Binkbenc at 14:39