Dear me, this isn't going well, is it? Pipes looks like a perfectly serviceable little game. Nothing special, but of its time. I can see exactly what I need to do - use the different pieces of pipe available to me to build a pipeline from the water main to my house (or houses if I up the difficulty). I can move my little plumber around easily enough, zipping him between places ready to lay some pipe. The only problem is that I can't work out for the life of me how to purchase and lay pipe. I've pressed every button on the keyboard, but nothing. I can imagine exactly how the game would play, so it's not a big issue, but it would have been nice to have been able to see the happy faces of the occupants of the house when I switched on their water. Ah well, let's hope for something better.

Next up on the randometer is...Bedlam 2: Absolute Bedlam! I don't have the first game in the series so I'll be playing this one straight. 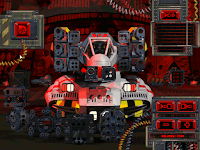 ...AAARRRGGGHHH!!! This is getting a bit ridiculous. After a bit of fiddling, I managed to get the game running (the setup program thought it should be running in a 32-bit version of Windows, but I managed to manually extract it all and get it running under DOS). It loads up fine, the menu is fine, the mission select is fine...then the mouse seems to hang on the weapon select screen. The mouse works fine on the other screens, and I know the game itself isn't hanging because the keyboard still responds - I can hit Esc to go back to the main menu - but I can't move the mouse over to hit the Play button to get on with the game, and no other keys seem to do anything. I'm cursed. At least it's going to massively inflate my otherwise-woeful completion stats for the year!

Next up on the randometer is...Deathtrap Dungeon! Interesting. Let's hope this one works.
Posted by Binkbenc at 13:33