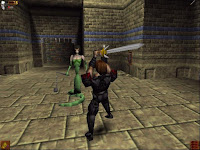 Ugh, you know what, I'm going to skip the rest of Deathtrap Dungeon and Heroes of the Lance. I got about half / two-thirds of the way through Deathtrap Dungeon, but I've completely lost all impetus with it. Heroes of the Lance was just impossible! It's exactly as I remember it back on the Spectrum, but with slightly (ever so slightly!) better graphics, and I could get about the same way through it...none at all. Wander about through endless corridors, get lost, die, repeat. Ah well. So, next up on the series list is Dragons of Flame. I don't think I've played this one, so interesting to see how it compares to Heroes of the Lance.

And next up on the randometer is...The Ship! Not sure how this will go. It's a multiplayer game where you have to murder other players without being noticed. I'm not usually a big fan of pure online multiplayer games, but I'll take a look.
Posted by Binkbenc at 16:14