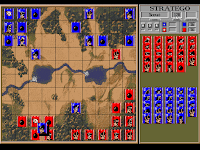 Stratego is exactly what it set out to be, a faithful rendition of the boardgame. It's actually a much simpler game than I first thought. It's a bit like battleships in a weird way. You hide your flag somewhere on your side of the board, and your opponent does the same, then you both add some bombs sprinkled around. These are all of the static units in the game. The aim is to have one of your units capture the opponent's flag. The rest of your side of the board is then filled with an assortment of different units with different numerical ratings, running from 1, the highest, down to 9, the lowest (scouts). When two units meet, the one with the lower value will win the battle. The exception is that when two units with the same value meet they are both destroyed, and a bomb will destroy any unit. All units can move one square orthogonally at a time, except for scouts that can move two squares. That's pretty much it. The computer plays well enough, but once you've played a couple of games there's not much more to it. Onwards!

Next up on the randometer (which is definitely broken...sniff! Something in the latest Windows update seems to have stopped it loading properly.) is...Gex! Yes, the Gecko. I know there were a few Gex games, but I only have the one. The only question is whether this is going to be a Win 95 game that won't play nice. Hmm, the answer is clearly NO. Windows flat out refuses to run the installer, so that's that. Next up is...Rebel Galaxy! Not a game I know anything about. It's on GOG, though, so hopefully will run.
Posted by Binkbenc at 13:51